what is a lolita dress ? What is Lolita Fashion?

Hello my Lovely Lolita Enthusiasts (If your not, then you will be by the time I’m through! )

The term “Lolita” may be off-putting to those who first hear about the fashion because of the connotation it holds from Vladimir Nabokov’s novel, “Lolita”, which changed the meaning of the name for most people in the Western world. It is generally assumed though that the name of the fashion comes from a distortion of the meaning while word-borrowing from English. In the case of the fashion the term “Lolita” only refers to the child-like nature of some of the clothes and is also used because of the beauty or cuteness of the name. Lolita Fashion is emphatically not about looking sexy and is instead about looking cute or elegant.

Lolita comes in several different types, but the most common styles arePunk Lolita, Goth Lolita, Sweet Lolita and Classic Lolita All of which have ribbons and frills, but they different in colors and styles.

~Lolita fashion is a style of dress orginated in Japan. Although “Lolita” is a reference to Vladimir Nabokov’s famous novel, and Lolita is often worn by teens, most adherents present themselves as Victorian children or baby dolls and prefer to look “cute” rather than “sexy”.

Japanese culture places a higher value upon extremely youthful appearance and behavior than Western, and some adult women buy large amounts of products, such as Hello Kitty goods, that are typically marketed only to children in the West. Lolita fashion is perhaps a more visible extension of this phenomenon.

In general, Lolita fashion tends to imitate Victorian-style girl’s clothing and often aims to imitate the look of Victorian porcelain dolls. Skirts are knee length and may have a crinoline or petticoat to add volume. As in mainstream Japanese fashion, over-knee socks or stockings are extremely popular. Black fishnet stockings and white or black tights are also common. Shoes or boots with high heels – though not usually stiletto heels – such as Mary Janes, complete the look. Frilly, ruffled or lace-trimmed Victorian blouses are also popular especially with “Gothic Lolita” types, who may also favour long skirts and jackets rather than overtly “childish” designs. Apart from the occasional shortness of skirts, designs are usually modest, sometimes with long lace-capped sleeves. Lace headdress and bracelets are usually worn.~ 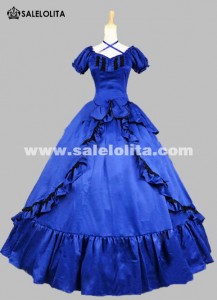 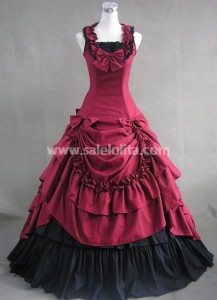 Punk Lolita:
Gothic Punk has a rock-inspired look. It usually features tartans, stripes, chains, piercings, and an overall more industrial look. Lolita punk is similar, but with a lolita twist. Lolita punk keeps the lolita bell skirt, but is less feminine and keep the elements of punk. 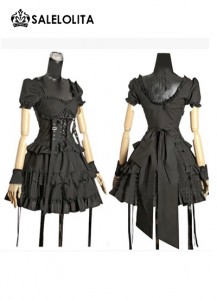 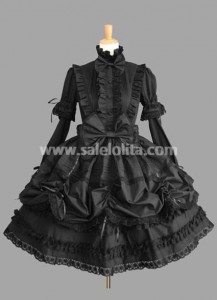 Sweet Lolita:
They have lots of lace and ribbons, usually light-colored (although there are black/white sweet lolita), attempting to look as cute and little-girlish as possible. End results typically exudes a doll like appearance. 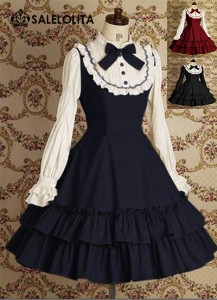 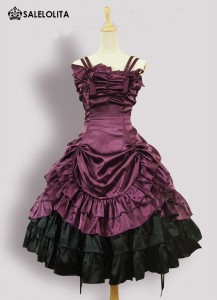 Classic Lolita:
They are more traditional, look more like the Victorian fashion, light-coloured, also more mature-looking. Traditional Maid-style clothing and Alice in Wonderland-style apron may be classified into this genre. 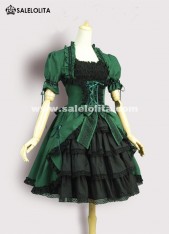 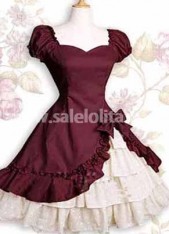 3 thoughts on “what is a lolita dress ?”