Gothic Lolita is also called Gothic Lolita (Gothic Lolita), originated from Europe in the Gothic subculture, by the Japanese after absorption, become a completely different and the Gothic art style. Mainly refers to the style of art, including dress, music, literature, painting and other art works. This mainly refers to the kind of clothing. Officially called ゴシック・アンド・ロリータ (Gothic And Lolita) , GothLoli（ ゴスロリ）, namely Gedeluoli.

This style is a combination of a variety of different image and become, in addition to the girl type literal innocence with Gothic wind grey decadent, also set in nineteenth Century of the Roman doctrine, doctrine of metaphysics, mysticism, supernaturalism, odd, curious, fun, French century thought, slash doctrine, classical decadent principle and so on to.

(EGA):EGL is the elegant Gothic, set of angels and Demons feeling in a body, the design is more gorgeous than Gothic Lolita; EGA is a neutral dress of Gothic garment, as aristocratic noble feeling.

Here are some pictures of some of theGothic Lolita Dresses: 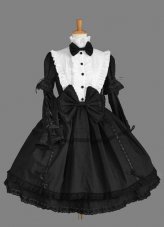